A new shore power facility was inaugurated today at the DFDS terminal in Copenhagen by, among others, Copenhagen’s Lord Mayor Lars Weiss. The facility significantly reduces the ships’ CO2 emissions while they are in port, thus ensuring cleaner air for the benefit of the environment and even more so for the neighbours on Østerbro. 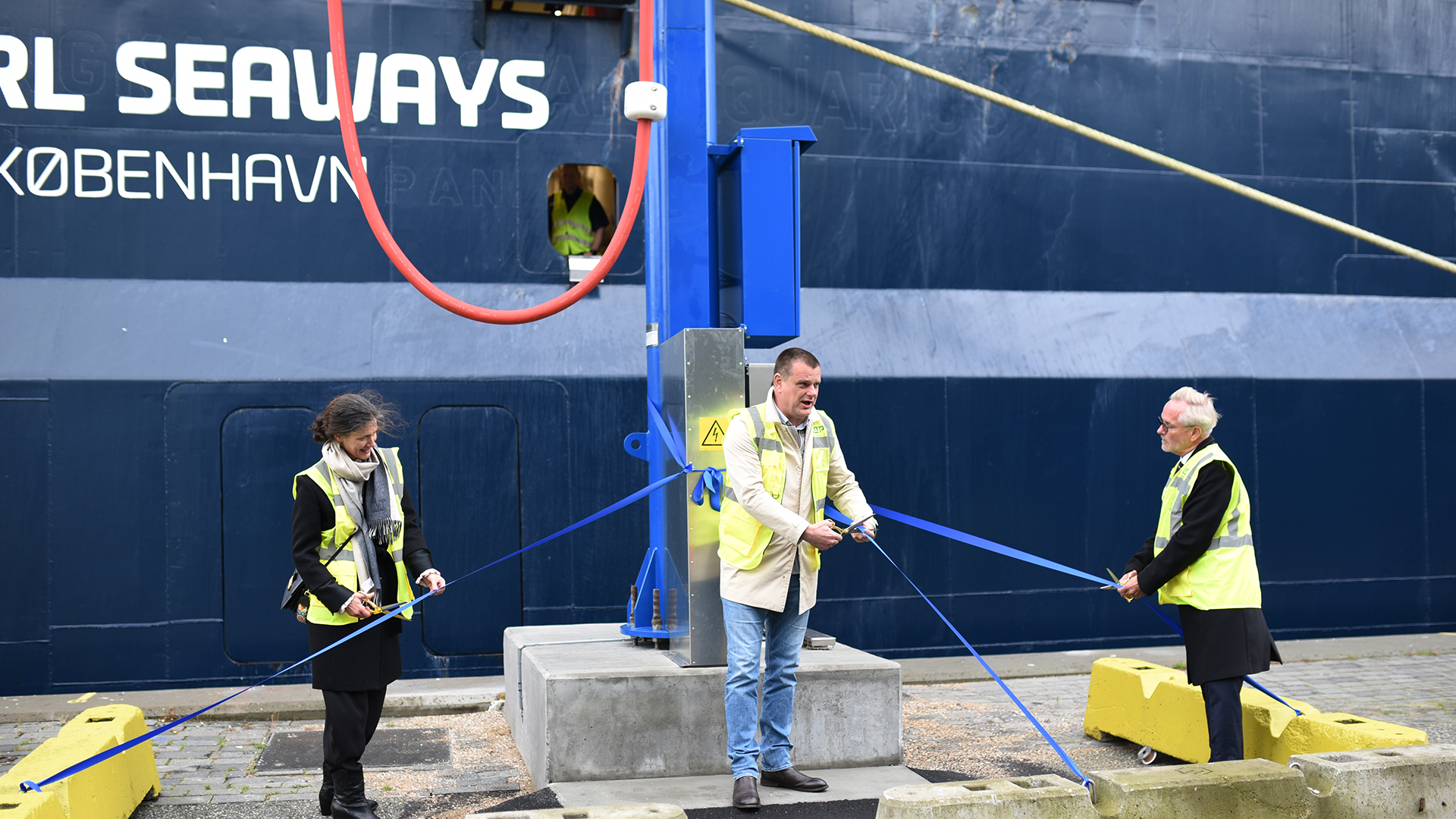 With the new facility, the DFDS ferries now have the possibility to connect to shore power in both Copenhagen and Oslo. The facility is the result of a partnership between Copenhagen Malmö Port (CMP) and DFDS, which makes it possible to switch off the ships’ generators in port and thereby significantly reduce the emission of air pollutants and particles.

The Lord Mayor of Copenhagen, Lars Weiss, participated in the inauguration of the facility when Pearl Seaways was connected just this morning.

“With the new shore power facility, we are taking an important step towards a Copenhagen with less air pollution. It is good for both the climate and the neighbours of the port, that the ferries can now turn off the diesel engine and connect to climate-friendly electricity when they dock. I also look forward to establishing shore power for the cruise ships at Langelinie and in Nordhavn, as soon as the Folketing has changed the legislation,” says the Lord Mayor of Copenhagen, Lars Weiss (S).

At CMP and DFDS, there is a lot of joy and satisfaction that the ferries now can connect to shore power and thus move in a greener direction.

“Today’s inauguration of the shore power facility for the DFDS ferries marks a very important step in our efforts to make the port activities in Copenhagen greener. I would like to thank DFDS, our technical advisor COWI and our general contractor Actemium for their efforts in working together to realise the project, which will have a significant great climate and environmental benefit,” comments Barbara Scheel Agersnap, CEO of Copenhagen Malmö Port.

“I am proud to present the first shore power facility in Copenhagen for the benefit of both passengers and the local environment. This is the rewarding result of a solid partnership between CMP, Actemium and DFDS. We are facing the green transition, which is enormously complex, and it is precisely partnerships and joint efforts such as this that are essential when we need to develop green, innovative solutions and move in the right direction,” remarks Peder Gellert Pedersen, Executive Vice President and Head of Ferry Division at DFDS.

The shore power facility for DFDS is the first in Copenhagen, but this will not be the last. In 2024, cruise ships in the port in Copenhagen are expected to be able to use shore power when they dock at Ydre Nordhavn and at Langelinie in Østerbro.

“We are pleased that shore power is finally coming to Copenhagen. And this facility will not be the only shore power facility in Copenhagen. Right now we are working on finding advisors for the work to establish shore power for the city’s cruise ships in Ydre Nordhavn and on Langelinie, so that in the future we can ensure lower CO2 emissions from the ships - and thereby cleaner air to Copenhageners,” says By & Havn’s CEO Anne Skovbro.

For information regarding shore power for cruise ships calling in Copenhagen:

Some facts in brief