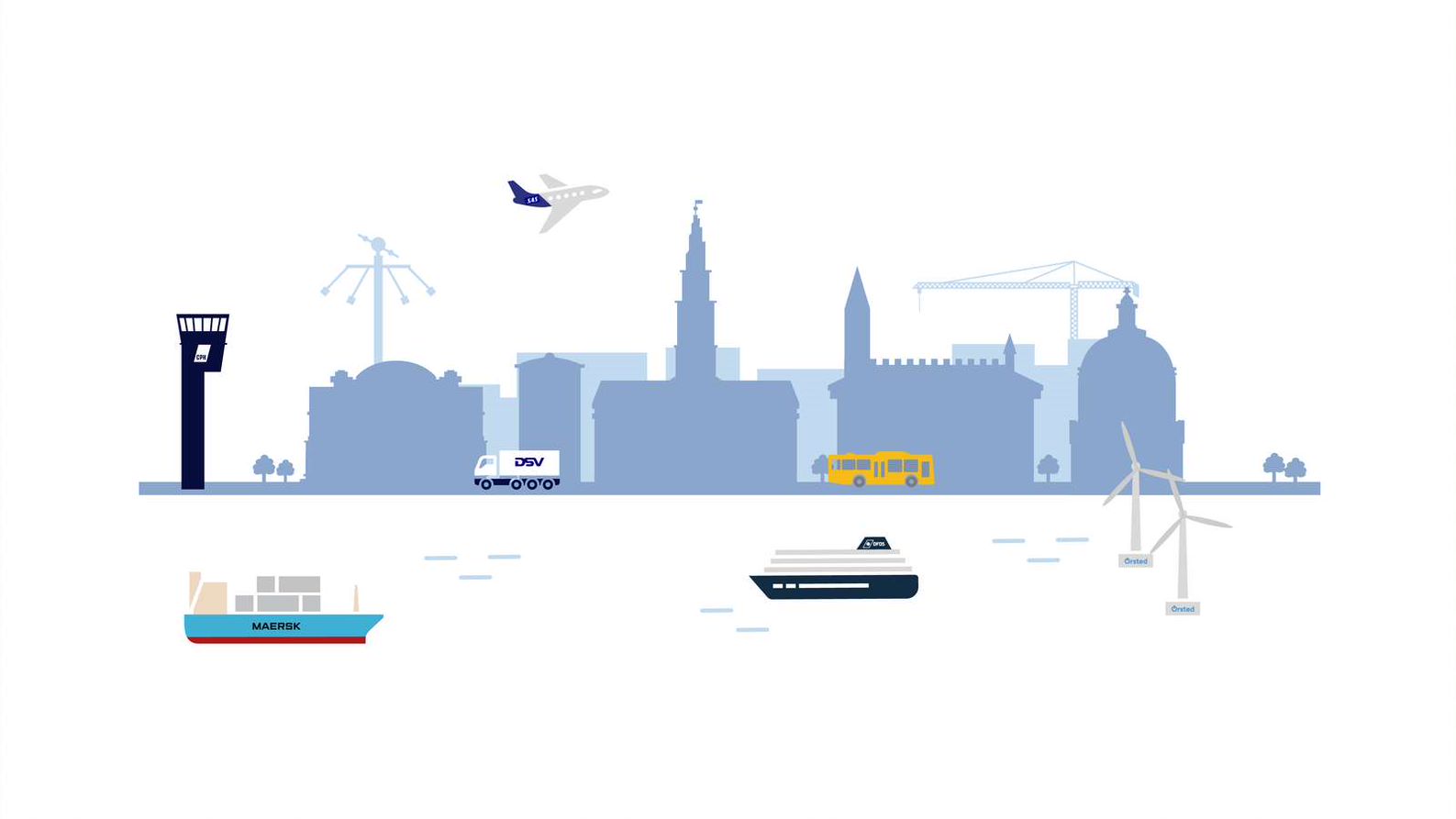 Copenhagen Airports, A.P. Moller - Maersk, DSV Panalpina, DFDS, SAS and Ørsted have brought together the demand and supply side of sustainable fuels in a unique partnership with the concrete vision to develop a new ground-breaking hydrogen and e-fuel production facility as soon as 2023. When fully scaled-up by 2030, the project could deliver more than 250,000 tonnes of sustainable fuel for busses, trucks, maritime vessels, and airplanes every year. Production would potentially be based on a total electrolyser capacity of 1.3 gigawatts, which would likely make it one of the world’s largest facilities of its kind. The production from the fully scaled facility can reduce annual carbon emissions by 850,000 tonnes.

COWI and BCG act as knowledge partners for the project, and the project is supported by the Municipality of Copenhagen in line with Copenhagen’s ambitious policies for decarbonisation. However, the partnership hopes that the project can, over time, act as a catalyst for similar projects in other parts of Denmark and internationally.

If realised as envisaged, the project will be located in the Greater Copenhagen Area and could supply renewable hydrogen for zero-emission busses tendered by Movia and heavy-duty trucks managed by DSV Panalpina, renewable methanol for A.P. Moller - Maersk vessels and renewable jet fuel (e-kerosene) for SAS airplanes and air transport out of Copenhagen Airports. The project will require a large-scale supply of renewable electricity, which could potentially come from offshore wind power produced at Rønne Banke off the island of Bornholm.

Today, such sustainable fuels come at a higher cost than fossil-based fuels. To become competitive with fossil fuels, the production of sustainable fuels will need to be matured, built at industrial scale, and go through a cost-out journey similar to what has been seen over the past decade in other renewable energy technologies, such as offshore wind, onshore wind and solar PV. As an example, the cost of offshore wind has declined by approx 70% in Northwest Europe since 2012. For this to happen, governments and industry must come together to create a framework that incentivises private investments in large-scale sustainable fuel production.

Although several partners are challenged by the deep impact of COVID-19, the partnership’s long-term commitments to fighting climate change remain intact. The industrial partners see this project as a way to combine the dual objectives of accelerating the green transformation and providing economic stimulus to the Danish economy post the COVID-19 crisis. Denmark is in a unique position to become a hub for the production of sustainable fuels, creating jobs and securing a leading position in establishing an entirely new industry, which will be key in driving decarbonisation towards net zero in 2050, not just in Denmark, but also globally.

The electrolyser facility will not only be a potential cornerstone in decarbonising the partners’ businesses but will also deliver a critical contribution to reaching Denmark’s ambitious goal of reducing carbon emissions by 70% by 2030 compared to 1990 by replacing fossil fuels in heavy transport with sustainable fuels. The vision of the partnership is to develop the project in three stages:

The first stage, which could be operational by 2023, comprises a 10MW electrolyser which can produce renewable hydrogen used directly to fuel busses and trucks.

Stage two comprises a 250MW electrolyser facility which could be operational by 2027 when the first offshore wind power from Bornholm could be delivered. This facility would combine the production of renewable hydrogen with sustainable carbon capture from point-sources in the Greater Copenhagen area to produce renewable methanol for maritime transport and renewable jet-fuel (e-kerosene) for the aviation sector.

Stage three, which could be operational by 2030 when the offshore wind potential at Bornholm has been fully developed, would upgrade the project’s electrolyser capacity to 1.3GW and capture more sustainable CO2, enough to supply more than 250,000 tonnes of sustainable fuels to be used in busses, trucks, maritime vessels and airplanes. The project has the potential to displace 5% of fossil fuels at Copenhagen Airport by 2027 and 30% by 2030.

The partnership will now move forward and engage in dialogue with the regulatory authorities on the framework and policies needed to support the development of using sustainable fuels at scale in the transport sector in Denmark, and to seek public co-funding to conduct a full feasibility study of the project. If the feasibility study confirms the viability of the project vision, a final investment decision for the first stage of the project could likely be taken as soon as 2021.

Thomas Woldbye, CEO, CPH Airport, says: “Whether we operate in road transport, shipping or aviation, we all have a major task to contribute to the sustainable transition in Denmark. The challenge of creating a future-proof and sustainable fuel is common to everyone in the transport sector, and the fact that we are now working together in a partnership is crucial for us to be able to produce sustainable fuel in the necessary quantities. It also supports the ambition to transition Danish aviation to become completely free of carbon emissions in 2050 and make Denmark a pioneer in the development of future climate-friendly fuels.”

Jens Bjørn Andersen, CEO, DSV Panalpina, says: “This ambitious partnership fits well with our long-term targets to reduce emissions and find sustainable solutions for our industry. We are proud to play a part. The transport sector is very important for Denmark but leaves a significant CO2 footprint and we are committed to finding ways to pave the road for a greener future. While this initiative is local, our long-term ambitions remain global."

Søren Skou, CEO, A.P. Moller - Maersk, says: “Decarbonising the transport sector is a significant and complex task that requires collaborative contributions from every company, organisation, and country. This project provides a first step in the massive transformation to produce and distribute sustainable energy. In Denmark, we have an opportunity now to accelerate the green transformation and take lead in powering the future with sustainable energy and I am pleased that we can contribute with concrete actions. We need many such projects both in Denmark and around the globe to achieve our ambition in Maersk of becoming carbon neutral by 2050.”

Torben Carlsen, CEO, DFDS, says:
“The ability to establish a vision of an industrial-scale sustainable fuel production facility is due to the power of partnerships. The cooperation of fuel users and producers along with scientists and society is the fastest way to make sustainable fuels available as realistic alternatives to the fossil fuels we combust in our vehicles and vessels today. I hope that this partnership and our project will help us reach our goal of operating zero-emission ferries and trucks much faster than we had originally anticipated.”

Simon Pauck Hansen, Executive Vice President and COO of Airline Operations, SAS, says: “The infrastructure aviation enables has a significant contribution to the global society. SAS has very ambitious targets to reduce its climate affecting emissions and one of the key drivers is to use Sustainable Aviation Fuels. We support multiple initiatives and projects in our home market and hope that this project can commercialize and become an accelerator for the transition to decarbonized aviation.

Henrik Poulsen, CEO, Ørsted, says: “Decarbonising the road, maritime, and aviation sectors is key to bringing our economies around the world to net-zero emissions by 2050. Our vision to produce sustainable fuels in the Greater Copenhagen area will deliver the necessary industrial scaling to drive the needed cost-out towards making renewable fuels competitive with fossil fuels. With the right policy framework in place, this project could be a defining leap forward for the production of sustainable fuels in Denmark, which will further reinforce Denmark’s role as a global leader in technologies and business models for a sustainable future.”

Lars-Peter Søbye, CEO, COWI, says:
“This project gives Denmark a unique opportunity to spearhead the green transition in the transportation sector: We get to utilise Danish strongholds in, e.g., wind energy, and join forces in the electricity, district heating and transportation sectors. Cooperating across sectors and fostering partnerships among cities, companies and universities is exactly how we create real value and new sustainable solutions. At COWI, we are excited to take part in the project, contributing our knowledge about high-complexity, large-scale projects and green technologies.”