How to prepare for a high-capacity future

In the regions DFDS serves, major developments, such as Sumitomo Corporation’s new steel-processing factory in Turkey, and several major mergers and acquisitions in the EU will likely drive a need for higher shipping volumes in the coming decade.

To support customers as their shipping and logistics needs grow and change, DFDS has invested in six new mega freight ferries. Built at the Jinling Shipyard in China, these massive ro-ro vessels are 237.4 metres long and hold 6,700 metres of lane – enough for 450 trailers.

“The freight ferries are each equipped with a unique ramp system with three independent stern ramps and internal ramps on each side,” says Henrik Tidbland, Commercial Fleet Director at DFDS. “That makes loading and unloading easy and efficient, reducing time in port.”

Better for the environment

The ferries are equipped with an advanced scrubber system to reduce sulphur emissions in preparation for the global sulphur regulation which takes effect from January 2020. They also have a shaft generator system that enables the main engine revolutions to be set optimally to save energy. The shaft generators are also compatible with shore-to-ship power arrangements, allowing the vessels to be sensitive to the local community and environment in port by shutting down auxiliaries.

Through economies of scale achieved through larger capacity loads and the use of modern low-speed diesel technology, the new freight ferries’ energy consumption per trailer unit is reduced compared to existing vessels.

Dedicated to the Mediterranean

Two of the six ferries are dedicated to DFDS’ new Mediterranean routes. The first one, named Ephesus Seaways, was inaugurated into service on 7 March in Istanbul and is currently preparing for its first sailing to Trieste. The second will arrive in Istanbul later this spring. 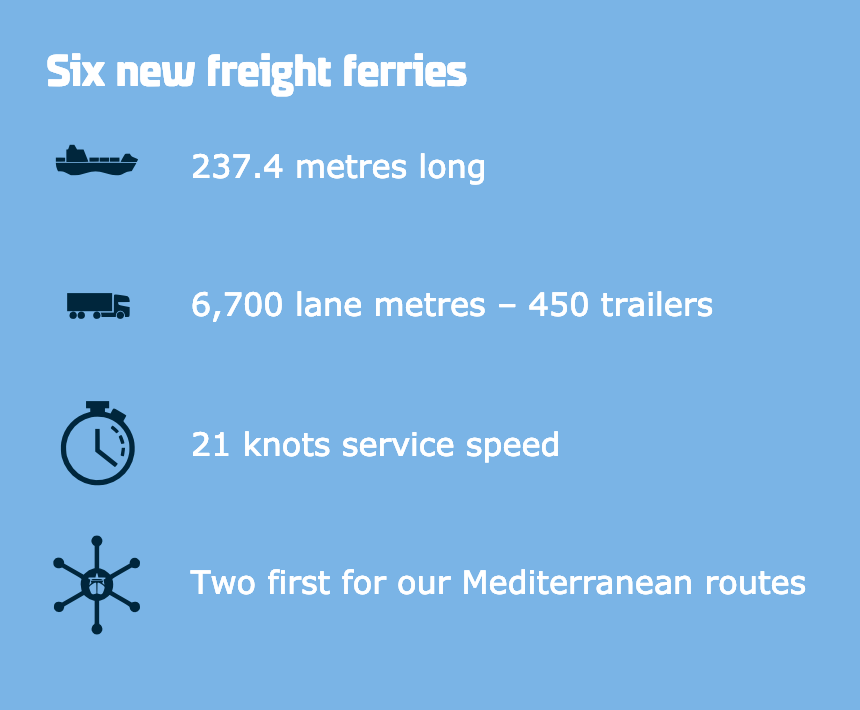 Read more about DFDS and news from many different industries we support.