Hydrogen is one potential fuel type we are investigating. It contains no carbon, can be produced using only renewable energy and water and does not pollute. Hydrogen has the potential to become a significant fuel source for ships and society in general.

Large-scale hydrogen production plants are underway, and this will bring the currently very high cost of hydrogen down. Using hydrogen as fuel will make ships a lot simpler. Where we now have to use up to 5,000 spare parts to make a ship sail with a traditional diesel or heavy fuel oil, a hydrogen fuel cell powered ship requires fewer parts because all the moving engine components will no longer be needed – similarly to how an electric car has fewer parts than a traditional one.

Using hydrogen as fuel requires ships to be designed in another way than they are today, and all these factors need to be considered as we get closer to the decision about which fuel – or mix of fuels – will be the source of energy for DFDS vessels in the future. 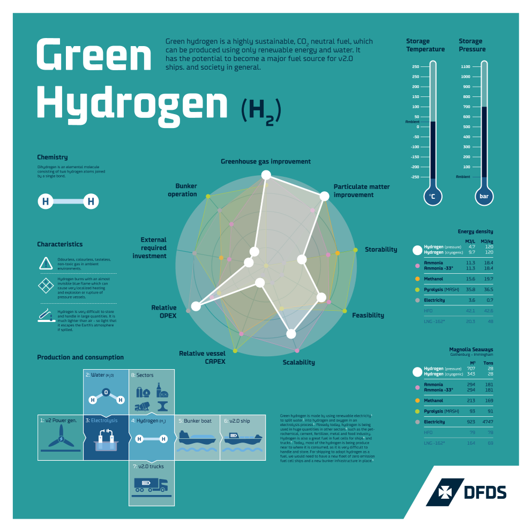 How we are investigating green hydrogen as a fuel source

We are building a new ground-breaking hydrogen and e-fuel factory, together with Copenhagen Airports, A.P. Moller - Maersk, DSV Panalpina, SAS, and Ørsted. The project will produce green hydrogen, which will be converted into about 800.000 tons of methanol. The methanol will then be shipped to a refinery which can convert it into eKerosene, a form of sustainable JetFuel. This project enables DFDS to get access to both green hydrogen and methanol.

We are upgrading one of our vessels to become a large-scale sailing test lab for fuel cells and innovative technologies, together with partners in the maritime industry.

Read about other sustainable fuels

Green ammonia can be sustainably produced from water, air, and renewable energy. It can be stored efficiently as a liquid.

Green methanol can be made by combining sustainably produced hydrogen and CO2 captured from renewable sources.